In schools and other organisations, approximately 80 per cent of the problems that arise are those concerning people. As a result, many organisations are increasingly providing interpersonal skills training for employees to help them manage both themselves and others. 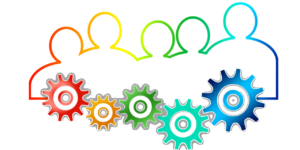 Communications, problem solving, influencing, motivation, effective teamwork and many other skills are included in such programmes. One theme running through all these courses is the benefit of being assertive. Yet many people misunderstand assertiveness and often mistake it for aggression.

We may look at behavior in terms of three main types; aggression, passivity and assertiveness. Most of us move from one type of behavior to another, depending on the situation and with whom we are dealing.

When asked what sort of words describe these three types of behavior people commonly include those listed below:

The benefits of assertion can easily be seen. It is much better to feel confident and in control that put upon or angry and volatile when dealing with others. Keeping behavior under control is a skill that can be developed and improved.

Aggressive and passive behavior seem to be much more innate than assertiveness, relating to the ‘flight, flight’ sort of behavior we can identify when under threat. From earliest days, human beings have been helped by nature to deal with threatening situations by either standing ground and ‘fighting’ or ‘running away’ from the problem. Physical changes take place in the body to help us meet these ends. As civilization has progressed, a third option (that of remaining and dealing with the situation) has emerged. Assertive behavior, by which we can deal constructively and confidently with such problems, has to be learned.

Some examples from everyday life help to illustrate the point.

(a) In a supermarket queue someone says ‘you don’t mind if I go first do you, I haven’t got much and I am in a rush? And you say OK when really it isn’t.

(b) A colleague asks you to stay late to help with something and you angrily refuse or passively agree.

(c) You buy a suit you are unsure of because the assistant says it looks good.

In cases like these we are often the losers because we feel bad at the time or later and cause other people to feel bad and react in a negative way towards us. Assertive behavior can help us to react in a positive way and with constructive outcomes.

As we have said, non-assertive behavior tends to come more naturally but at certain times we need to be assertive. Assertive behavior can be developed. We all have the ability to learn and develop skills which will help in our work and personal lives.

Being assertive means taking responsibility for our behavior, having respect for ourselves and others, and being honest. It allows us to say what we want or feel but not at other people’s expense. It means understanding the point of view of other people, and being self-confident and positive. It is not about winning come what may or getting your own way all of the time. Assertiveness is about handling conflict and coming to an acceptable compromise.

Being aggressive means getting your own way at the expense of others, making them feel worthless, incompetent or small. It doesn’t necessarily have to involve conflict. Humour and sarcasm can also be very aggressive.

Being passive means ignoring your interests and allowing others to manipulate you. It often means denying how you really think or feel. Passivity means not being active, not recognizing your own needs and goals and not doing something about them.

1. On three sheets of paper, brainstorm all the words you associate with:

Place them in order of priority.

Consider how the words make you feel. What are the benefits of assertiveness in specific situations, eg dealing with your head teacher or handling a difficult pupil?

2. Consider how you might respond assertively, aggressively and passively to the following situations.

(a) Your head teacher asks you to take a group of pupils on a school journey during the Winter holidays. You don’t want to go this year but you did go last year.

(b) A parent asks you to give extra attention to a pupil who has done badly in a mock exam. You feel this would be unfair on the rest of the class.

(c) As a favour, you allow a colleague to use your classroom every Wednesday morning. When you arrive in the afternoon the board has not been cleaned and the furniture has been left in an untidy state. This is the third week running that this has happened and you are beginning to feel annoyed.

We may express our own needs and take account of others. This may be formalized in a bill of assertive rights. The following statements outline some of our rights:

By believing in these basic rights we are empowered to demand and give proper treatment. As the final statement shows, there may be occasions when we choose not to be assertive. For example, your partner doesn’t like an outfit which you are particularly keen on, and you decide not to buy it because you want to please the other person. By choosing not to be assertive, you are deciding to bide your time on something and let things pass for the moment. Developing techniques of assertiveness does not mean that you have to be assertive all the time if you don’t want to.

Before continuing let us summarise the benefits of being assertive.

Advantages of being assertive:

1. One of the most often voiced advantages is that personally it makes us feel better about ourselves – it gives us confidence and prevents us from feeling powerless.

2. In terms of career development, a more positive image is communicated to others. It is more likely that potential will be rewarded.

3. If we take responsibility for our own behavior, we are much less likely to blame others and make excuses for our mistakes. In the long term this will save time and energy.

Your Dream Job Awaits You